Vintage Base Ball at The Barn at Stratford 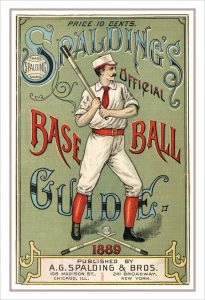 Location: The Barn at Stratford in Delaware, Ohio

About Vintage Base Ball

The Ohio Village Muffins play base ball (historically two words) as it had been played by the New York Knickerbockers, the first club to write down the rules of what has become modern baseball. The Knickerbockers organized their gentleman’s club in 1845 in the Lower Manhattan area of New York City.

The Civil War (1861-65) promoted the growth of the game beyond the eastern cities, as soldiers played base ball for recreation and enjoyment in their free time in camp. When the war was over, dozens of new clubs were formed in Ohio and throughout the Midwest. Initially, only a few rules governed a match. The rest was left up to the players’ sense of honor and good sportsmanship and the umpire’s decisions as he judged players’ actions by the gentlemanly code of the Victorian era.

About The Ohio Village Muffins

The Ohio Historical Society organized the Ohio Village Muffins, in 1981, to show how recreation and base ball were becoming a part of life in the mid-nineteenth century. The team was the first in the nation to play a regular schedule of vintage base ball matches and the Society has assisted in the formation of nearly 50 other vintage teams in Ohio and beyond, including Colorado, New York, Georgia, and Canada.

The uniforms consist of plain long pants, a white shirt with a bright shield containing the team emblem, a pill box hat, a leather belt with the team name embossed on it, and a bow tie.

The pieces of equipment used by both teams are reproductions. Bats are no bigger than 2.5 inches in diameter, but may be of any length. Balls are 10 inches in circumference with a single piece of leather covering them. Bases are at least one square foot and are filled with sand or sawdust. Ball gloves and protective equipment had not been invented.

The Delaware County Historical Society is a non-profit organization whose mission is to promote, preserve and sustain interest in the history of Delaware County. The Barn at Stratford is operated by DCHS as an event venue for weddings, corporate meetings and other special occasions.