The Delaware County Historical Society conserves and operates several historic buildings in Delaware County Ohio: The Cryder Historical Center, on East William Street, comprising the Nash House and the Research Library & The Meeker Homestead on Stratford Road, including: The Meeker Homestead Museum and The Barn at Stratford & The Historic Jail and Sheriff’s Residence on West Central Avenue.

The Meeker Homestead Museum is a museum in a house that is located at 2690 Stratford Road. The Forrest Meeker House is one of the oldest, built 1823, and most prominent historic homesteads in Delaware County. This historic home has been transformed into a fine educational museum of the early settlement of the Ohio country.

The Forrest Meeker Farm, including the 1823 house and 1848 barn, is listed on the National Register of Historic Places. The Delaware County Historical Society is proud to share this wonderful piece of our heritage with the community.

The Meeker Homestead Museum is Open

Enjoy this brief tour of the Nash House Museum in Delaware County, Ohio. Then, come visit us for a full tour guided by a docent from the Delaware County Historical Society.

The Nash House remains much the same as it was when the young Slattery family first lived here in 1878. There have been the obvious electrical, heating and plumbing upgrades over the years, but the “bones” of the house remain original. The front porch was added after 1916 and a bathroom addition and a kitchen remodel were completed in the 1930’s. The house does show signs of normal wear and tear. If you look closely, you can see the scars in the doorways made by Linnie Nash’s wheelchair (Linnie was left an invalid after a severe bout with scarlet fever). The Nash House is furnished with period pieces and accessories donated to the Historical Society by Delaware County families. These furnishings and the reproduction wall paper make the house a showcase of the Victorian period

Click to learn The History of Slattery / Nash Families

Thomas worked as a clerk for the railroad and Mina was a seamstress. The young couple moved into their new seven room brick Italianate home in 1878 with their two year old daughter Minnie Angeline. The following year their son William Henry was born and two years later they had another son, John Thomas. The house must have been a lively place with a young family with three children under the age of five! In 1882 Mina gave birth to her fourth child, a daughter, Sarah Mariah. Sadly, two weeks later Mina died. Baby Sarah lived for seventeen days. The funerals took place in the parlor of the house. Heartbroken, Thomas Slattery sold the house (for $2800). The next year his two year old son, John Thomas, died. Thomas Slattery died one year later of consumption, leaving his two young children, Minnie and Willie parentless. The children grew up with their grandparents, John and Mary Slattery in Lewis Center. Willie eventually moved to Kansas and Minnie married Robert Parker. Many people in Delaware remember Dr. George Parker, a well loved Delaware physician who died in 1996. He was one of ten children of Minnie and Robert Parker. In 1885 William Henry Nash acquired the house at 157 E. William for $2400. Henry Nash worked, as so many people in Delaware did, for the railroad. Henry and Emiline Nash had five children: Frank, Charles, Linnie, Eugene and Dora, ages 11 to 22. The Nash House must have been a very busy household! Frank, the eldest child also worked for the railroad. He was killed at Springfield, OH when a huge icicle fell from a water tank stabbing him in the chest. He died instantly. His funeral was also held in the parlor of the Nash House. He left a wife and a seven month old daughter. After the deaths of Henry and Emiline, the house passed to Eugene Nash and his wife Lois. Eugene Nash was a grocer and a well known active Delaware citizen. Lois was a well known seamstress. They had one child, a daughter Pauline who was recognized for her weaving and quilting skills. Her grade school water colors are displayed throughout the house. Pauline was active with the Red Cross. After the death of her parents, Pauline Nash donated her family home and many family artifacts to The Delaware County Historical Society. Although Pauline had never married or had children, she loved children and hoped her family home could be used for educational purposes. The Nash family had lived in the house for nearly 70 years.

The Nash House Museum is Open

The Historic Jail and Sheriff’s Residence 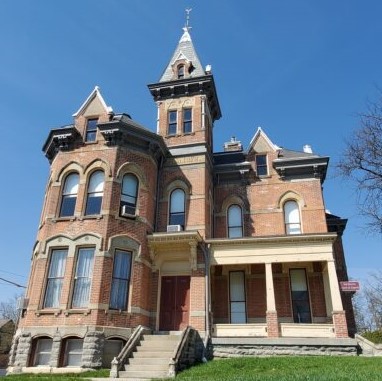 Constructed in 1878 by David Gibbs of Toledo, the old Historic Jail and Sheriff’s Residence was in use until 1988 and was listed on the National Register of Historic Places in 1990. This beautiful, primarily Italianate structure features some Gothic Revival and Second Empire details. The 8,500 square foot building contains sixteen cells that were used for men and two used for women.

As part of the prison reform movement of which Rutherford B. Hayes championed, this building served as the sheriff’s home. The sheriff’s wife, known as the “Matron,” cooked meals and cared for the inmates.

This newest museum features several displays and period furniture, and the cell block is open for tours.

Discover the secrets of this 144-year iconic building in downtown Delaware.

Research Library – next to the Nash House Museum

The Cryder Historical Center and Research Library is located at 157 E. William St and it’s the place to go to learn more about Delaware County’s rich history. It comprises a Historical Library, an Archives Repository, a Historical Museum, and a Research Center. The library is operated by local volunteers interested in helping you.

Resources Available in the Research Library:

The Cryder Historical Center and Research Library is Open 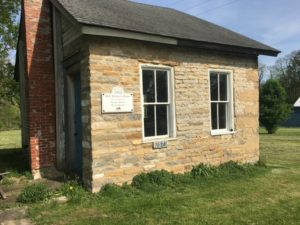 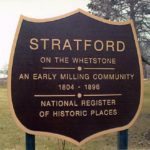 Stratford Ohio, along the banks of the Olentangy River, was a thriving mill town in the 1800s. Mills required lots of workers and workers need homes and lodging.  The National Registry of Historic Places notes that Stratford had saved several the original buildings from that historic era.

You can step into an 1800s Millworker Cottage and feel like you’ve stepped back in time.

Who  lived here:  Henry Breyfogle, who worked in the nearby paper mill, owned this property from 1866 to 1913. Henry and his wife raised 5 children in this small home. The Cottage is furnished as it would have been in the mid1800s. 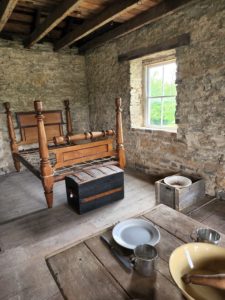 How the cottage was conserved for history

Ohio Edison (First Energy) purchased the property in 1956. In the 1990s the Olentangy River Valley Association was granted, by Ohio Edison, to maintain the property.   The ORVA did more than maintain. They put on a new roof and removed the wood frame addition from the building and restored the building to its original design.

The developers of Coughlin Crossing purchased the building and donated it to the Delaware County Historical Society.  The historic building is exhibited as a Millworker Museum.

Donations to the Delaware County Historical Society provided funds to further repair and restore the building.
Donations for the Millworker Cottage can be made at the Meeker Museum or Click to Donate Online

The Millworker Cottage is Open

The Garth Oberlander/The Barn at Stratford

Features of The Barn

A Storytelling Video of the Barn

History of the Barn

Forrest Meeker left Vermont in 1797, tried settling in in Pennsylvania, Southern Ohio, and Kentucky before buying 624 partially-cleared acres along the Olentangy River, including a wooden grist mill on the river, from John Beard in 1811.  The original log house he likely built for his family has disappeared from the landscape, and the early years of settlement were surely complicated by the War of 1812-14, when American forces used the road along the Olentangy as a major supply route for the effort to defeat the British at Lake Erie.  Colonel Meeker served as Quartermaster for General William Henry Harrison’s army during the war, and with profits from supplying the army with provisions from the day and night operations of his mill, he was able to build a fine brick home in 1823. He added the west wing to the rear of the house several years later as the family grew.  The milling operation on the river also grew, as did the settlement of the Stratford and Delaware areas and, in 1829, Meeker added facilities for the carding and fulling of wool from surrounding sheep farms.  In 1838, the mill was sold to Judge Hosea Williams and Caleb Howard, who established a paper mill on the river.

Colonel Meeker died in 1845, and the entire 624 acre farm was acquired by George Bieber, a neighboring farmer, and in 1848 he built the fine stone-end barn we see today, as well as a similar barn he built a half mile to the north.  Bieber died in 1855, and the property went through several splits and changes in ownership among his heirs and others until the homestead was acquired by the A. C. Miller Co. (which later became Union Fork and Hoe, Inc.) in 1920.

Records show that the homestead was operated as a farm by tenants until Garth Oberlander, a recent Ohio Wesleyan University graduate, bought the property in 1941, farmed it for several years, and began his antique business, Garth’s Antique Auction, in the 1950s. Tom and Carolyn Porter joined the firm in the 1960s, were mentored by Oberlander, eventually took over and expanded the antique auction business in the 1970s, and raised their family in the Meeker House, as Oberlander had done before them. When the Porters retired in the early 2000s, the auction business continued under the ownership of Jeff and Amelia Jeffers, and remains a nationally known antique auction house. In 2010 the Porters, who had retained ownership of the real estate, sold the corner to Turkey Hill, and donated the remainder, with all of the historic buildings, to the Delaware County Historical Society.

This historic property and 1848 barn have been transformed into The Barn at Stratford, a Historic Barn Event Venue.  The Delaware County Historical Society operates The Barn at Stratford to make it available to the community and to generate the funds needed to restore, maintain, and improve this magnificent piece of Delaware County History.  The barn and grounds are available for weddings, special occasions, business or corporate events, or community events.