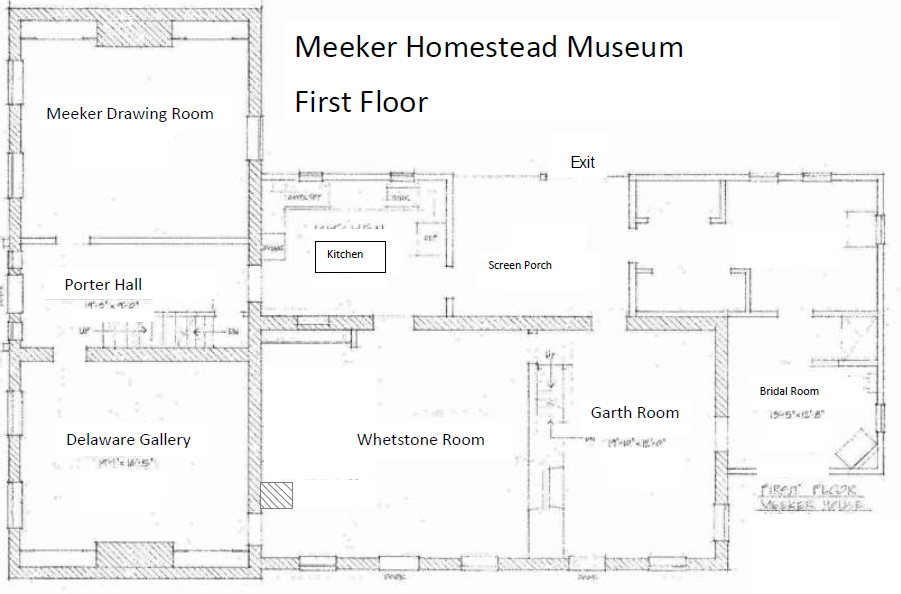 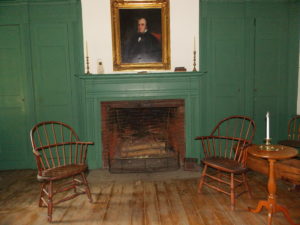 This “period” room would have been used as the Meeker’s drawing-room. Guests would have been shown to this room upon arrival, and as such, it was known as the “best room” for its fine display of possessions. This is the room where ladies would “withdraw” after dinner, while the men would remain in the dining room possibly to enjoy cigars and talk. It was used for weddings, christenings, and funerals, as well as what would today be called a family room. The drawing room is where families would gather to read, do sewing, play piano, and enjoy cards and other games.

Some of the artifacts in the Meeker Drawing Room:

This room may have been the Meeker dining room when the house was built, but since there were only two rooms downstairs in 1823, this room would have served multiple functions.  The Delaware Gallery now features rotating exhibits.

This space located in what we once called “the addition” would have contained a large cooking fireplace and served as the original kitchen.  From recent research, we now believe this part of the house predates the 1823 portion. This room is now used for educational programs, meetings, special events, and to provide space for our rare pre Civil-War era barn loom, textile exhibits, dower chest, and other artifacts from the 1800s. During the Oberlander years, Garth Oberlander received visitors here.  The reproduction wallpaper was added in the 1940s and once covered all the walls of this room.

This part of the addition was used as the “newer” kitchen for over 100 years once the large cooking fireplace was removed from the Whetstone Room location, and cookstoves became popular.  Later in the 1990s, it was used as a bedroom. This area is named for Garth Oberlander (1914-1973), who bought the property in 1941 from the A.C. Miller Company.  Garth began selling antiques from the barn in early to mid-1940s, but the antique auction business known as Garth’s Auctions started in 1954.  A portion of this room showcases the history of Garth Auctioneers & Appraisers, which became a nationally acclaimed auction house. A large painting of Carolyn Bemiller Porter (1933-2019) is also on display. Carolyn and her husband Tom Porter (1935-2011) acquired the business from Garth in 1971 and lived here. The Porters donated the six-acre Meeker property with its historic home and barn to the Delaware County Historical Society in 2010. Ownership of Garth’s Auctions, Inc., passed from the Porters to Jeff and Amelia Jeffers.

The Garth Room also features a new exhibit that will cover the Archeology Camp that took place in August of 2019. Displays will include the tools that archaeologists use, some of the 12,000 artifacts that were found, and information on soil stratification. There is also a large replica of one of the test pits.

The 1990s addition is not typically on the museum tour.  This space once accommodated one-floor living.  It is currently used as a bridal party dressing room and make-up room.  Wedding parties who reserve The Barn at Stratford may optionally reserve this space. Restroom facilities are available when the space has not been booked by a wedding party. 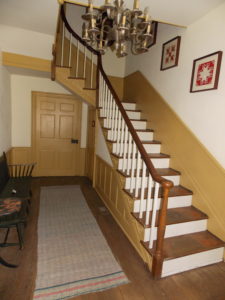 Standing inside the front door, you are in the 1823 portion of the house. The house initially included only two rooms downstairs on either side of you, the basement below, and two upstairs bedrooms and a hall. The hall and stairway of this Federal style home show that the Meeker family was well-to-do.

Look through the windows and imagine the Meeker property extending to the river where there was a grist mill that later became a woolen mill, and then a paper mill. At one time there were as many as ten mills in a 10-mile stretch of the Olentangy River, known until 1833 as the Whetstone River.

This area is not open for tours.

If you have business with the Society, please return during business hours and use the ofﬁce entrance on the south side of the building. Access is via the Turkey Hill parking lot.

The upstairs landing may have been previously used for family activities such as a sewing room, storage room, or an enclosed nursery.  In the 1970s, the Porter family added a bathroom.  The restroom is available for public use. 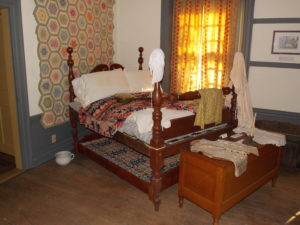 This “period” room is evolving as we acquire additional artifacts from the early 1800s.  The bedchamber depicts how families slept, bathed, and attended to their personal needs during this era. Rope beds were in use until coil springs were invented in the early 1870s by Heinrich Westphal. Low trundle beds stored under the regular beds would have provided additional sleeping space for children, although families often slept together as a way to stay warm for the interior rooms mimicked the outside temperature upon waking. Bathing was usually a “sponge bath” done in a tub that needed to be filled with water that was heated and carried upstairs, or from a washstand that held a pitcher and bowl.

Some of the artifacts include: 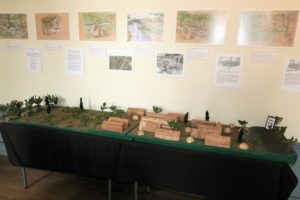 This was one of two bedrooms in the 1823 portion of the Meeker home.

The American Indian exhibit features a timeline covering 13,000 years and honors Delaware County’s first indigenous peoples.  There are displays of relics and artifacts that represent various periods in history.

This room is named after John Beard who purchased 624.25 acres from Benjamin Gilman in 1807. He then sold the property to Forrest Meeker in 1811. Here you will find our Spinning Exhibit and our One Room School House Exhibit. 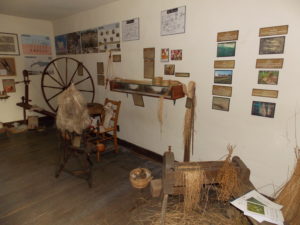 The large Spinning Exhibit explores the importance of flax fiber and wool during the 1800s, how they were processed, and the products that were made.

The One Room School House Exhibit features a large wall-sized mural displaying photographs of the many one-room schoolhouses once found in Delaware County. Pictures of students gathered on schoolhouse steps bring this history alive, as do the small student Fashion Desk and McGuffey Readers on display.

This room was named for Nicholas Gilman who was awarded 4,000 acres, including this property, for military service in 1800, by President John Adams. The Stratford Mill Town Exhibit, as well as the Interurban & Dinkey Exhibits, occupy this space.

Information on the history of the Stratford area and its milling industry is detailed from its beginnings in 1804 to its final days in 1896.

The east wall of the Gilman Room celebrates the story of the Delaware Street Railway Company and the Columbus, Delaware, & Marion Interurban. Please note the bygone photos on display and the railway chair artifact from the interurban railway.

This room is named for George Bieber who bought approximately 500 acres including the house and outbuildings from Forrest Meeker in 1845.  Bieber built the present stone-end bank barn in 1848. We now use this historic structure as an event venue known as The Barn at Stratford. The Bieber property was gradually subdivided.  Various members of the Bieber family lived on Stratford Road into the 1940s. This space is now being used for our Delaware Chair Company Exhibit (1870-1940). In 1871, the founders of the Delaware Chair Company invited John G. Strain, a long-time furniture maker, to join the firm. It was originally located on East Winter Street by the Olentangy River. The company was noted for producing school and institutional furniture, particularly chairs with double-cane and splint seats. In its heyday in the mid-1870s, the company was producing over 40,000 chairs annually and won many awards for its outstanding products. It was said that Rutherford B. Hayes requested one for the White House when he became President.

The Museum is located at:

Help us continue to improve the Meeker Homestead Museum. Although we do not require an admission fee, we suggest a $5 donation to help us support our museum, furnishings and exhibits.