Roy Nichols will present “The Fighting McCooks” to the Big Walnut Area Historical Society at 7 p.m. Tuesday, Jan. 18, via Zoom. 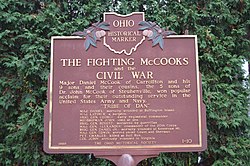 The Ohio McCooks achieved prominence in the Union Army during the American Civil War and became known as “The Fighting McCooks.”

Two brothers, Daniel and John McCook, and 13 of their sons were involved in the army, making the family one of the most prolific in American military history. Six of the McCooks reached the rank of brigadier general or higher. Several family members were killed in action or died from their wounds. Following the war, several others reached high political offices, including governors and diplomatic posts.

Nichols is a frequent speaker at the Big Walnut Area Historical Society. He graduated from Gordon College north of Boston then Cleveland-Marshall Law School. He also studied at Oberlin College and the Free University of Amsterdam.

Nichols taught history and government before becoming an attorney with the state of Ohio for 10-plus years. He then practiced law for 24 years.

In retirement, Nichols has become a storyteller, plays Santa, and gives historical presentations. He also finds time to be a member of an Underground Railroad Study Group, as well as the Ohio History Connection, Westerville Historical Society, and two Civil War Round Table groups.

Because of COVID-19, the Jan. 18 program will be given via Zoom. A link to the program will be sent to all the people who get Big Walnut Area Historical Society newsletter via email. For those who don’t receive the newsletter, the Zoom link can be requested by emailing info@BigWalnutHistory.org.

The Big Walnut Area Historical Society owns and operates the Myers Inn Museum on the corner of Columbus and Granville streets across from Sunbury Village Square. For more information, visit http://BigWalnutHistory.org.