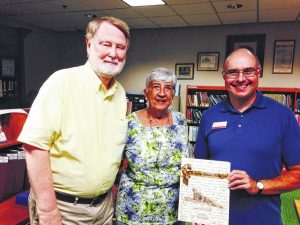 On behalf of their family, cousins Steve Mitchell and Bonnie Mitchell (left) donated 17 Civil War-era letters written by their ancestors to the Delaware County District Library. Joe O’Rourke, adult services manager, accepted the letters as well as a book about the two men who wrote the letters.

The Mitchell family, living in the Ostrander/Radnor area of Delaware County, has donated 17 Civil War-era letters that they found in their attic to the Delaware County District Library.“Since there aren’t many Mitchells left in Delaware, we wanted to give the letters to the library, so they could be digitized and so everyone, not just our family, could read them and learn from them, too,” said Steve Mitchell.

Samuel C. and Edwin Frank Mitchell served in the Union Army in the eastern and mid-western states during the Civil War. Their letters were sent to and preserved by Samuel’s wife, Mary Jane (Sloop) Mitchell. The brothers served in the 82nd Ohio Volunteers, 8th Indiana Cavalry, and 38th Illinois Infantry.

The letters from the two young farmers give a look into the lives of soldiers and their daily activities, sometimes having to “fight in the mud and sleep in the mud and eat in the mud,” saying “it is nothing but mud.”

Both were heavily involved in battle as Samuel was badly wounded twice, as well as captured, and Edwin rose to the rank of sergeant major. Samuel never returned from the war.

At a recent Mitchell reunion, held at the Old Stone Presbyterian Church, the family decided that the original 1862-1864 letters should be donated to the library so they could be used by others researching how the residents of Delaware County served in the Civil War.

They especially liked the idea that the library will digitize the letters and put them on the internet as part of their Delaware County Memory project so scholars from around the world can have access to the letters.

One of Samuel’s descendants, Steve Mitchell of Uniontown, Ohio, became interested in the brothers and did research to find out more about daily lives and where they were when each letter was written. He published his findings in a book through an online publishing house so all of his relatives could view his research findings as well as facsimiles of the 17 letters. The book’s title is a greeting from one of the letters — “My Dear and Affectionate Wife and Child, Letters From the Civil War.” A copy of the book can be found in the genealogy department of the library and is also available on Amazon.

The letters will soon be available online on the Delaware Country Memory website at delawarecountymemory.org.

Information for his story was provided by Steve Mitchell