Garth’s has left The Barn

After sixty four years, Garth’s Auctions has left The Barn at Stratford. 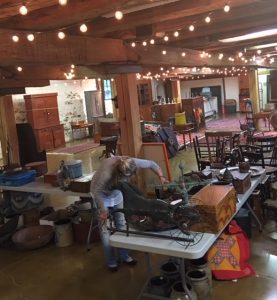 Garth’s Auctions was founded by Garth Oberlander in 1954. 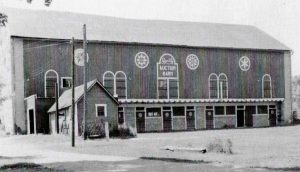 Born on April 16, 1934 in Ironton, Ohio, Tom married Carolyn Bemiller Porter in 1957. In those very early days, the couple began to buy antiques while stationed at Fort Meade, Md., to furnish their apartment on a limited budget.

“We started haunting antique shops,” Porter told The Delaware Gazette in a 1981 interview. “Within 18 months we bought enough furniture to furnish an apartment.”

From there, the Porters only began to build. In the early years of their marriage, Tom worked as a salesman by day and a picker by night – often coming home to their four daughters as Carolyn went out to continue the buying and selling efforts.

Their faithful attendance at Garth’s Auctions in Delaware, Ohio, combined (undoubtedly) with their professional and fair approach, brought them to the attention of Garth Oberlander who started Garth’s Auction House in 1954. In 1967, Oberlander tripled the staff of his small but mighty auction company from one to three when he hired Tom and Carolyn Porter. Little did he know that their modest beginnings would grow into one of the most well-respected auction firms in the country.

In the early 1970s, the Porters took over the entire operation of Garth’s, where Tom Porter built upon his strong “people” skills, auctioneering abilities and solid business ethics. For many years, he was a primary contributor to the popular HGTV series The Appraisal Fair.

Years later in fine tradition, the same decision would be made when Jeff and Amelia Jeffers joined the company in the mid-1990s. The Jeffers took over operations of the business at that time and in 2006 took full ownership of Garth’s Auctions, Inc.

[accordion clicktoclose=”true”]
[accordion-item title=”Learn more about Jeff and Amelia Jeffers”]
Ohio: It’s not like the ’90s, but antiques are moving
By: Antique Trader | February 25, 2008

A new guard has taken over at another prominent Ohio auction house. Jeff and Amelia Jeffers are in their first year of sole ownership of Garth’s Auctions in the town of Delaware. Former owners Tom and Carolyn Porter, who bought the business from founder Garth Oberlander in 1973, are staying on as consultants.

Jeffers became acquainted with Tom Porter in 1991, not as a Garth’s customer, but as a painter hired to paint the farmhouse on the property. Jeffers showed Porter his business plan for starting a franchise restaurant. Porter must have been impressed with the package. “He and Carolyn approached me about buying into the (auction) business at that time,” said Jeffers, who chose to pursue his restaurant plan. The parties got back together in 1995 and worked out an arrangement to be partners, with the Jeffers becoming full owners in 2006.

Garth’s conducts approximately 20 auctions per year with six to nine of them cataloged in full color. Monthly eclectic auctions are not cataloged. “Our eclectic auctions contain excellent quality (merchandise), just not what the national and international market is looking for,” said Jeffers.
[/accordion-item]
[/accordion]