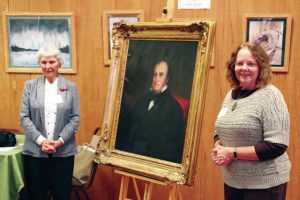 Donna Meyer, right, executive director of the Delaware County Historical Society, accepts the donation of a portrait of Judge Hosea Williams from Louise Warner, founder and board member of the Stratford Ecological Center. Warner is a descendant of Williams. The portrait will hang in the Historical Society’s Meeker Homestead Museum.

Supporters of the Stratford Ecological Center and Delaware County Historical Society celebrated a shared heritage and a homecoming of sorts this week.

Stratford founder and board member Louise Warner donated a portrait of her ancestor, Judge Hosea Williams, to the Historical Society during a luncheon held Wednesday at the ecological center. Warner is the great-great-granddaughter of Williams, whose first name she said was pronounced “hoh-zee” by his contemporaries in 19th Century Delaware County.

“He wasn’t really formally a judge, but he was deemed a judge because he was very honest and trustworthy and a kind man,” Warner told the luncheon audience at Stratford. “He was recognized as a community stalwart.”

Painting to be displayed at Meeker Homestead Museum

“Because of his connection to Stratford, this seems like a natural place for him,” Meyer said.

David Hoy, development director for the Stratford Ecological Center, said the portrait has been hanging in his office at the farm for “quite a few years.”

“When I became aware of this portrait — of course, I love anything historic — I was like, ‘Oh, he should come home to Stratford,’” Meyer said. “When David contacted me and said Dr. Warner was going to give this us, I was so thrilled. I had the privilege of learning a little about Hosea Williams — what a remarkable man.

“You should be very proud to come from such strong community leaders as these folks,” Meyer said to Warner during the presentation.

“(Walcutt) was quite a versatile person and he painted this picture early in his career, probably before he became very famous,” Meyer said. “It’s a wonderful portrait.”

A native of Berkshire County, Massachusetts, Williams was born in 1792 and moved to Delaware County in 1817, purchasing a 300-acre farm two miles west of Delaware. In 1825, Williams moved his family to Delaware (northeast corner of Winter and Washington streets) and lived in town where he embarked in mercantile business and became a community leader. He was elected a county commissioner and became the first president of the Delaware County branch of the State Bank of Ohio in 1845, which later became the Delaware County National Bank.

Along with Judge Caleb Howard, he purchased the woolen and gristmills at Stratford from Forrest Meeker in 1838 and converted them to a paper mill. This mill on the “Whetstone River” (now the Olentangy) had an undershot water wheel that provided power and turned the presses. Operations began Oct. 1, 1839. The mill burned two years later, but was rebuilt.

Williams also contributed materials for building the small stone millworkers’ homes at Stratford as well as the Stratford Methodist Church, which was dedicated July 4, 1844. He was a member of the first board of directors of the Cleveland, Columbus, and Cincinnati Railroad.

Williams was called judge due to the fact that before the present judicial system was adopted, a common pleas judge had two associate judges sit with him. They were not necessarily familiar with the law, but saw to it that justice was done, while the actual judge supplied the legal knowledge.

(Editor’s note: Lynn Foreman, board secretary and communications committee chair of the Delaware County Historical Society, contributed to this story.)