Newspapers Exhibit in the Gazette

Extra! Extra! Read all about it! 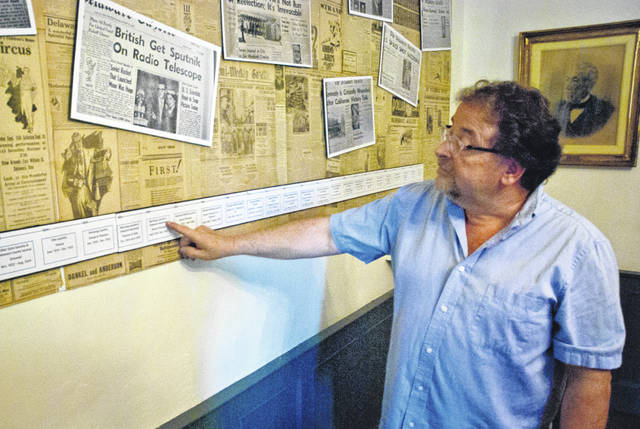 Benny Shoults, Meeker Homestead Museum curator, points to the year on the timeline that the Thompson family, longtime owners of The Delaware Gazette, became involved with the paper. Over time, the name of the paper changed many times before becoming The Delaware Gazette as it is known today. 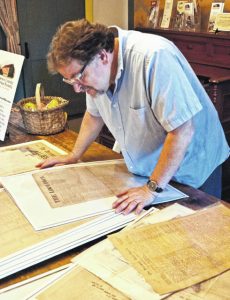 Benny Shoults, curator of the Meeker Homestead Museum, looks through the many different newspapers that at one time or another was a part of the Delaware County community. The newspaper that he is closely inspecting is the Loco Foco.

“One of the main reasons we selected the theme ‘Newspapers of Delaware County’ was because this is the 200th anniversary of the Delaware Gazette,” said Benny Shoults, Meeker Homestead Museum curator. “The research proves an intriguing story, like a box of surprises.”

Shoults said the history of the newspaper is a story that has been with us since Roman times when the Acta Diurna, translates as Daily Acts or Daily Public Records, were posted.

“These were daily Roman official notices, a sort of daily gazette,” he said. “They were carved on stone or metal and presented on message boards in public places … and evolved until the 1400s with the invention of the printing press.”

According to Shoults, most cities, small towns and villages had newspapers that reported local, national and international news. 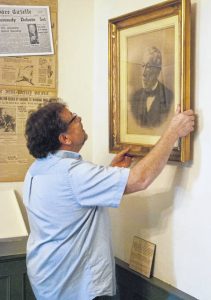 As The Delaware Gazette approaches its 200th anniversary in October, the Delaware County Historical Society celebrates the history of Delaware County as it was chronicled in the community’s newspapers. Benny Shoults, Meeker Homestead Museum curator, hangs a portrait of Abram Thompson that was donated by the Thompson family to the DCHS.

Shoults added that newspapers are “probably the number one source of history” for small communities. He said even newspaper obituaries chronicled the personal history and legacy of someone who lived in the community.

“Every reader could form an opinion from what they read in the newspaper and then they could act on it, thus making some sort of difference in the community,” he said. “In most cases, the story was factual. Especially, very early on, there were very few newspapers that didn’t at least gather the facts and double check to make sure their sources were right.”

Shoults said that the topic of newspapers in Delaware County turned out to be very large. He said thinking about the speed news travels today, “it is mind-boggling” compared to the years before even the telegraph. He said news from other cities might have taken two or three days, maybe longer, to reach people by mail.

“I am sure that in many cases, the newsworthy event had either been resolved or taken on a whole different direction by the time it showed up in the newspaper,” he said. “I would imagine that this was the reason that our civilization was driven to find other ways to relay the news.”

Shoults said the question is: “Is the newspaper still a viable messenger?”

The exhibit is open from 2 to 5 p.m. every Sunday (July 15 to Dec. 23) and during special events, as they are announced at the Meeker Homestead Museum, 2690 Stratford Road, Delaware.