A road trip through Ohio’s presidential past

While this year’s Republican National Convention in Cleveland will certainly be memorable, Ohio already has a remarkable presidential pedigree. The state lays claim to eight former U.S. presidents — seven Republicans and one Whig, a predecessor to the Republican Party. Three served in a row in the 19th century.

If you’re in the market for a summer road trip, you should consider this 416-mile route, which will take you through the Buckeye State from the Cincinnati area to the suburbs of Cleveland, the site of this year’s RNC. 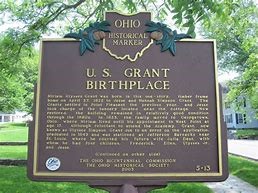 Hiram Ulysses Grant was born in this small home outside of Cincinnati in 1822 and went on to serve as the country’s 18th president and the second president from Ohio. Along the way, he shed his first name, attended West Point and led the Union Army to victory in the Civil War. But the military hero wasn’t seeking to trade his uniform for the White House.

“General Grant had no aspirations of becoming President Grant,” said Jim Setty, site manager at the Grant Birthplace. “He was so popular that the Republican Party knew that he was sure to win the election.”

The major issue that faced Grant during his term was the mending of relations between the North and the South. Instead of extending an olive branch to the South, he erected a Christmas tree. It was President Grant who made Christmas a federal holiday. 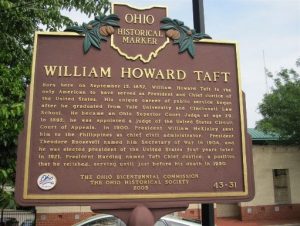 Twenty-five miles divide Grant’s birthplace from that of William Howard Taft, who was born in Cincinnati in 1857 and went on to serve as the 27th president and seventh president from Ohio. After serving as a judge, a diplomat and a cabinet secretary, Taft shared something with Grant other than a home state.

“You could say he was a reluctant president. People say that William Howard Taft was a poor politician, but he was a very strong administrator,” Chief of Operations at the William Howard Taft National Historic Site Kerry Wood told CNN. Taft’s wife, Helen, had enough presidential ambition for the both of them, pressing her husband to run. 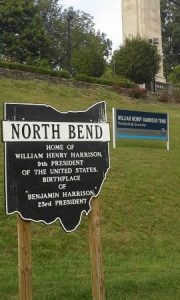 North Bend, Ohio — 20 miles from Taft’s home in Cincinnati — was home to two presidents, but only one was born there. The nation’s ninth and shortest-serving president, William Henry Harrison, was born in Virginia, but moved to Ohio before beginning his military and political careers. While Virginia has his birthplace, Ohio had his heart, giving both states claim to the president who could serve as a tie-breaker between the states in the contest for most native presidents. Virginia is the only other state to lay claim to eight presidents.

Harrison was the first president to come from Ohio and ran as a member of the Whig party. At that time, there wasn’t really a campaign procedure for candidates to follow.

“He was the first president to campaign. He started the whole thing,” Beverley Meyers, president of the Harrison-Symmes Memorial Foundation, told CNN.

Harrison died 32 days after taking office in 1841, becoming the first president to die in office. His family, however, remained in Ohio, where his grandson Benjamin was born in 1833. Benjamin became the nation’s 23rd president and the fifth president from Ohio in 1889.

Like his grandfather, Benjamin Harrison also made campaign history, becoming one of the first candidates to run a “front-porch” campaign, choosing to run his campaign close to home. It was a technique that many of the other Ohio presidents would utilize, although it should be noted that Harrison’s front-porch at the time of his campaign was in neighboring Indiana.

The temperate
Location: Birthplace of Rutherford B. Hayes, Delaware 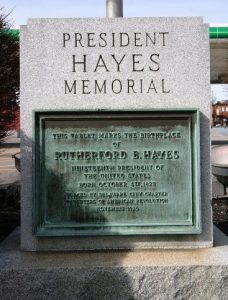 About 150 miles from the Harrisons’ home, in a small town north of Columbus, Rutherford B. Hayes was born in 1822. He would go on to serve as the nation’s 19th president and the third president from Ohio.

Today, his birthplace is marked by a plaque in front of a BP gas station, although the community is in the process of erecting a statue in his honor near the center of town. The location couldn’t be more perfect for a road trip — no matter how efficient your car is, you’re definitely going to need to fill up the tank at this point in your journey.

Hayes went to the White House after one of the most hotly contested elections in American history. Hayes was the first president to earn the electoral votes needed to win the presidency without winning the popular vote, which he lost by more than 250,000 votes.

While Hayes is partly remembered for his temperance policy — during the Hayes administration, alcohol was removed from the White House — he was also faced with the challenge of Reconstruction, an issue that Grant hadn’t been able to fully resolve during his presidency.

Despite rising to the highest office in the country, Hayes frequently visited Ohio and returned to his roots.

“President Hayes, I think, would very much agree that anyone can become president, even from your smallest places in the United States. They can come from pretty humble backgrounds,” said Brent Carson, president of the Delaware County Historical Society. “In the United States, you can really come from the smallest places and reach your highest goals.” 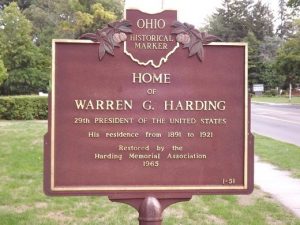 Twenty miles north of Delaware, in the city of Marion, Warren G. Harding ran his 1920 campaign. He won and became the nation’s 29th president — the eighth and (so far) final president from the Buckeye State.

The 1920 election was the first in which women had the right to vote in every state. He took after his fellow statesmen who had won the White House before him and opted for a front-porch campaign. During the campaign, more than 600,000 people traveled to Marion to hear Harding speak from the front porch of his home.

While Harding’s administration is most frequently remembered for the Teapot Dome Scandal, he had a productive and historic term. He was the first sitting senator to serve as president. He was the president who dedicated the Tomb of the Unknown Soldier. He also started the Veterans’ Bureau, a precursor to the Department of Veterans Affairs.

And he never forgot where he came from, frequently discussing his roots in the Midwest.

“For Warren Harding, Ohio was what made him,” Sherry Hall, site manager at Harding’s home in Marion, told CNN. 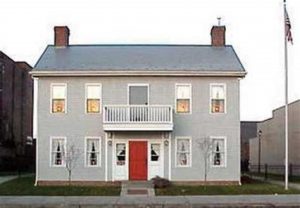 Just outside of Youngstown, 140 miles Northeast of Harding’s stomping ground, is the birthplace of President William McKinley. McKinley was the 25th president and sixth president from Ohio. The lawyer, soldier and congressman was born in 1843 and lived in Ohio for his entire life, until serving as president from 1897-1901. Unfortunately, his term was cut short by an assassin.

McKinley won the White House using the go-to front-porch campaign and went on to serve a term remembered for work with tariffs and American business. But he also had to handle the Spanish-American War. It was a challenge that McKinley and every American president before him didn’t come into office equipped to tackle.

McKinley went from leading an isolationist country to annexing the Philippines, Guam and Puerto Rico during his term — far more exotic locales than he was used to from his boyhood. 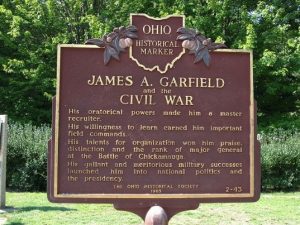 About an hour from McKinley’s birthplace, just outside of Cleveland, is the home where James Garfield ran his 1880 campaign. Garfield served as the 20th president and fourth president from Ohio — following on the heels of Hayes and Grant.

Garfield returned from that year’s RNC surprised to be the nominee. The longtime congressman and Civil War veteran went intending to nominate fellow Ohioan John Sherman, but the party couldn’t agree on a candidate.

“The convention rather started looking for a ‘compromise candidate,’ somebody they could settle on who was acceptable to everyone, who could be the standard-bearer,” Todd Arrington, site manager at the James A. Garfield National Historic Site, told CNN.

Garfield took advice from another Ohio president on how to campaign, eventually opting for the Ohio method: the front-porch campaign.

“Rutherford B. Hayes told Garfield that if you want to be elected, you should stay home, don’t say anything and just look wise,” Arrington said.

Unfortunately, Garfield shared something in common with McKinley. Just months into his presidency, on July 2, 1881, Garfield was shot in Washington. He fought his injuries until succumbing to infection months later, on September 19, 1881.

Garfield’s home in Mentor is only 23 miles from the site of this year’s RNC, so close that convention attendees will be staying in hotels down the street.