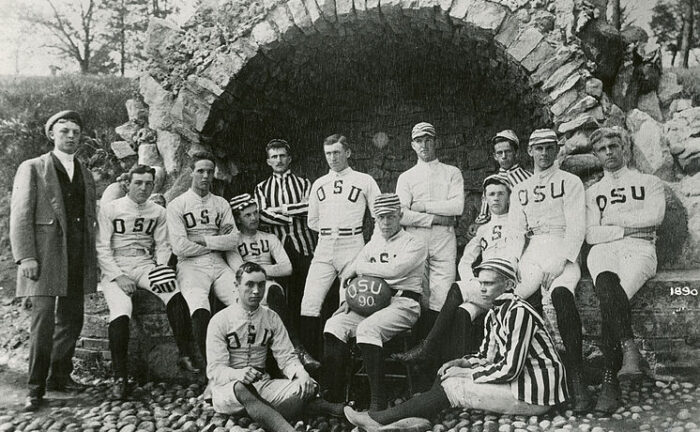 Everything You Always Wanted To Know About: The First OWU-OSU Football Game

The imminent arrival of a new football season is on sports fans’ minds these days, and so we thought we would share a gridiron-related post.

As those “in the know” know, the storied football history of The Ohio State University started right here in Delaware County. Here are details about the school’s first football contest, hosted by the Battling Bishops of Ohio Wesleyan University, which you may not know.

Where played: A site near the sulfur spring and the Delaware Run and north of the historical marker, not far from Selby Stadium. Spectators sat on the hill. The games were later moved as the ball kept falling into the river.

Other rules differences in 1890:

Other facts — This was the only game OSU played that spring, and the team did not yet have a coach; a coach was obtained before the fall schedule of games. The right tackle for OSU was Herbert Johnston, inventor of the electric mixer. OWU played club football as far back as 1875; the faculty forced its termination until 1890. 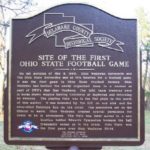 Historic marker dedicated on the site where the game was played — May 3, 2008. Two-time Heisman Trophy winner Archie Griffin shared, “I doubt on May 3, 1890, the participants on the Ohio State-Ohio Wesleyan football game could have realized that they were setting in motion something that would produce what we see today.”