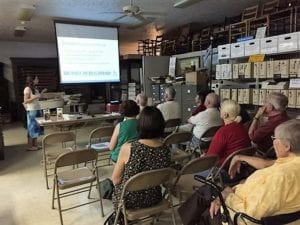 The Delaware County Historical Society has made the Delaware Daily Journal Herald newspaper for 1916 and 1917 available online at OhioMemory.org, a service of Ohio History Connection.

The presentation explained what a Digitized Newspaper is, why it is valuable for research, and the process of transforming a newspaper into an online digital resource.

Jenni showed how to access Online Digital Newspapers at OhioMemory.org and Chronicling America.

The attentive audience of fifteen asked numerous questions which Jennie fielded clearly and completely.  The program concluded with enthusiastic applause and thanks.

The Daily Journal Herald was published between March 21, 1902 and March 30, 1929. Like many newspapers of the time, the Journal Herald published local, State and national news, covering topics from sports to culture to politics, as well as items of a more general interest such as agriculture, religion, architecture and other topics.

The Delaware Gazette is a daily newspaper published in Delaware, Ohio.  It has been published since 1818 on weekday and Saturday mornings.  The paper’s circulation in 2004 was approximately 8,000 daily.

The Historical Society volunteers search paper copies of the Delaware newspapers to answer questions about past county events, businesses, and activities.  Often this research is about what happened 100 years ago.  For example: 2017 is the 100th anniversary of the United States’ entry into World War I. Many of the early 20th century newspapers are fragile; pages are flaking away. The newspapers and the history they represent are literally crumbling even as they reveal their stories.

Thanks to a grant from the Delaware County Commissioners and assistance from Ohio History Connection, the project has added two years (1916-1917) of daily newspapers to the collection. As funds become available, the Society will continue digitizing the newspapers published between 1820 and 1922. Donations to the project are welcome and may be sent to the Delaware County Historical Society, 2690 Stratford Road, Delaware, Ohio 43015.

To learn more about digitizing Delaware newspapers or to help raise funds for the digitization of more years, contact the Delaware County Historical Society 740-369-3831, ext. 2.