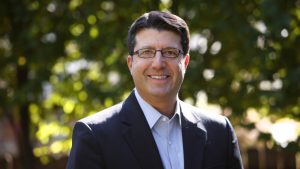 During World War II, an American woman broadcast Nazi propaganda to Allied troops, who dubbed her “Axis Sally.” Her real name was Mildred Gillars, and two decades earlier she had attended Ohio Wesleyan. Three decades later, she returned to Delaware to receive her degree.

Hear her tragic-but-true story from Flamm, author of “In the Heat of the Summer: The New York Riots of 1964 and the War on Crime.” This presentation represents OWU’s 2017 Joseph and Edith Vogel Lecture sponsored by the Department of History.

Michael W. Flamm has taught modern U.S. history at Ohio Wesleyan University since 1998. He is the author of In the Heat of the Summer: The New York Riots of the 1964 and the War on Crime (2016), Law and Order: Street Crime, Civil Unrest, and the Crisis of Liberalism in the 1960s (2005) and a coauthor of Debating the 1960s (2007), Debating the Reagan Presidency (2009), and the Chicago Handbook for Teachers (2011). He has won several teaching awards and has served as a Fulbright scholar and senior specialist in Argentina. (From Organization of American Historians) Learn more about Prof. Flamm OWU biography.

About the Joseph and Edit Vogel Lecture Series

The lecture series was endowed by Ezra F. Vogel ’50, a distinguished Ohio Wesleyan alumnus and a native of Delaware. It was established in his parents’ names “to promote among Ohio Wesleyan faculty, staff, and students, a better understanding of Delaware and the surrounding area.” This year’s 2017 Lecture marks the series’ 33rd year.

Ezra Vogel is professor emeritus at Harvard University and a Life Member of the Delaware County Historical Society.   Joseph and Edit Vogel operated the People’s Store in Delaware for decades.