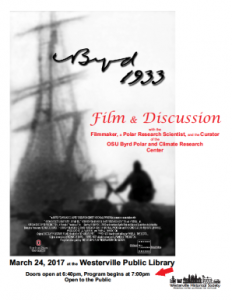 The Westerville Historical Society presents a Film and Discussion Program:

Culled from reels of film found in the papers of Admiral Richard E. Byrd and recently preserved by the National Film Preservation Foundation, Byrd 1933 is a glorious cinematic record of the famed explorer’s expeditions.  Through extensive research, filmmaker Pamela I. Theodotou has captured the expedition in total, along with Byrd’s own voice and the environmental and animal sounds of Antarctica originally recorded by scientists on the expedition.

If you have an interest in history, film making, or Antarctica, Join us in viewing Byrd 1933. After the screening, there will be a panel discussion with staff from Ohio State University’s Byrd Polar and Climate Research Center.

This event is open to the public. It will be held:

In the Meeting Rooms  of the Westerville Public Library