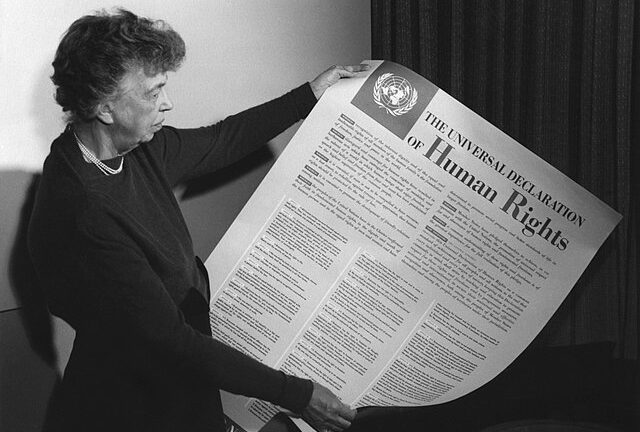 Largely because of it being the home of Ohio Wesleyan University, Delaware has had its fair share of famous visitors.

Presidents and First Ladies; Governors of Ohio; noted authors and politicians have included the city on speaking and engagement tours. In 1954, that included the former First Lady of the United States, Eleanor Roosevelt.

Roosevelt was on her own, of course, a highly respected political figure, diplomat, and activist. She engaged in frequent travel and was a noted public speaker. In January of that year her itinerary included an engagement at Ohio Wesleyan as part of a speaking tour at three Ohio colleges.

In her regular newspaper column (“My Day“) on January 19, 1954, she described her visit to Delaware and her lunch at Bun’s:

“Friday we spent most of the morning traveling from Miami University, Oxford, Ohio, to Ohio Wesleyan University. We arrived in Delaware, Ohio, in time to be taken for lunch to a delightful little restaurant run by a gentleman known as Mr. Bun because his father was a baker. His son is called “Biscuit” and another member of the family “Crumb,” so they are well identified with their occupation! The campus is separated by the village but really the village belongs to the campus and is part of it.

We had a quiet time until we were called for to dine with an interracial fraternity. This is one of the fraternities which takes in people of various races and seems to flourish in this university which emphasizes international interests and has one course even in practical politics. I enjoyed very much having an opportunity to meet with the boys of this fraternity and then we went to the hall for the evening meeting. After the speech there were questions which I think could have gone on for another hour but after three quarters of an hour we adjourned and went to another building for an informal coffee hour where the students had a further opportunity to put their questions.” *

In a story later publicized across the country, Hoffman sent a letter to his fellow OWU classmate and nationally-known clergyman Dr. Normal Vincent Peale referring to the former First Lady’s description of Delaware as a “village.” At the time, its population was approximately 11,000, and could not be so described, Hoffman shared.

Peale contacted Mrs. Roosevelt, who in turn wrote a letter apologizing to the entire city of Delaware!