Ohio Wesleyan University: ‘Back Porch’ sculpture is a symbol of Black life on campus 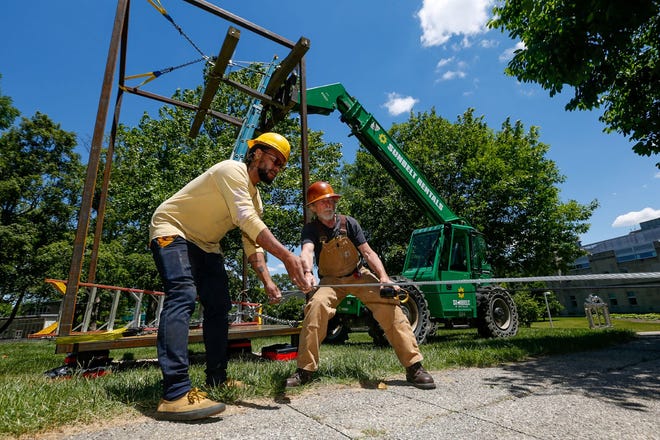 A sculpture that commemorates a meeting place for Black students attending Ohio Wesleyan University in Delaware has been erected outside the university’s historic Elliott Hall on the main campus.

Ohio Wesleyan graduate and California-based artist Andrew Wilson designed the sculpture, which was created and installed with assistance from sculpture professor Jonathan Quick.

Wilson said the “Back Porch” sculpture – a 14-foot-tall, 8-foot-wide and 8-foot-deep metal artwork – honors the former back porch at the university’s House of Black Culture, 65 Oak St., which was opened in 1970 and was rebuilt in 2019.

The sculpture “represents the space that we used to use on the back porch of the former House of Black Culture,” he said.

The porch was screened in, he said, and was an in-between space for Black students, a connection between the house and the rest of Delaware, allowing those on the porch to see out while others could not see in.

“It was a liminal space between outside and inside where we could be both highly visible and invisible. It was a space of respite for so many. ‘Back Porch’ is a way to honor this space and its importance to Black life at Ohio Wesleyan,” Wilson said.

The sculpture takes on extra significance, he said, because a back porch was not included when the building was rebuilt.

The volume of the sculpture is the same as that of the lost porch, Quick said.

“The sculpture is an open rectangular box set vertically on its longest axis. The (old House of Black Culture) was a great building, and Andrew and his fellow students have fond memories of that back porch space,” he said. “It was a great time to be making a real positive statement, with the sculpture Andrew designed to commemorate the Black experience here at Ohio Wesleyan and to kind of carve out a little bit of what he terms Black space.”

Wilson, 29, said his years at the university were amazing. Compared to his home in Oakland, California, Delaware is a “small place stuck in its old ways,” which many Black students found challenging, he said.

Wilson earned a master’s degree in fine arts from the University of California at Berkeley.

“I have a deep love for this place, and it’s also my duty to be extremely honest about what my desires and goals are and what I think the future of this place can be,” he said.

Quick said the sculpture is made of weathering steel, popular for outdoor sculpture because it rusts only superficially, with most of the metal unaffected after many decades.

Wilson studied sculpture under Quick as an Ohio Wesleyan student.

“He was a wonderful student and a great alum. He’s a friend of ours, and we wish him well in all his endeavors,” Quick said.

Wilson called Quick “an extremely caring and patient person” and said the sculpture could not have been created without Quick and the Ebb and Teena Haycock Public Art Endowment, created by their daughter, Lorry Luikart.

Haycock was an instructor of sculpture at Ohio Wesleyan from the 1960s to the 1980s, and his wife was a secretary in the theater department, said Luikart, also an Ohio Wesleyan graduate.

“My parents were always very big civil-rights advocates. They talked to us from an early age about treating everyone the same and not having any prejudices and biases,” Luikart said.

For a time, the Haycock family lived next door to Butler A. Jones, the university’s first Black instructor, Luikart said.

She said the endowment was created specifically for outdoor art at the university and other projects are likely in the coming years.

Wilson said he stays busy with a number of art shows and has completed several artist residencies. He said he soon will begin a 10-month residency in Galveston, Texas. His website is aiwart.com.