The haunting snapshots of abandoned classrooms and rotting stairwells mask a rich history.

And the cracking paint and broken glass hint at a vibrant past.

It’s not often that dilapidation invites art, but photographer Adam Lefevre decided to capture the golden years of five Delaware County buildings for a photo documentary. 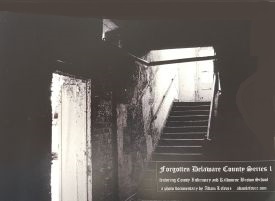 Click image to see this book in our webstore

The photos by Lefevre, a Delaware County Historical Society volunteer, are on display through July at Corner Framing and Gallery, 27 N. Sandusky St. in Delaware.

“I love history. Pictures tell a thousand words,” said Lefevre, 33, of Delaware. “It’s the end of an era.”

For at least two of the buildings, it could be the end, period.

The County Home could be razed by the end of the year, said Dale Hartle, president of the Ohio Regional Development Corp. in Coshocton, the company in charge of the demolition. It would cost about $75,000 to $80,000 to raze the building, he said.

“It’s uninhabitable,” Hartle said. “It’s in a condition that leads vagrants to abuse the property.”

Brown Township officials are taking bids to have the school demolished by the end of the year so they can expand ball fields adjacent to the property.

Officials are unsure about the Warren Tavern.

Sandy Wicker, the historical society’s librarian, said she doesn’t want to see any of the buildings come down.

“It breaks my heart,” said Wicker, 66, of Delaware. “They represent things you can’t replace.”

The County Home, built for $1,400 in 1855, closed in 1996 after more than a century of housing the poor, the mentally ill and people suffering from yellow fever and other epidemics. The building was a nursing home at the time of its closing.

Warren Tavern was built in 1815, and the building became a stop on the Underground Railroad.

A Christmas Carol author Charles Dickens once stayed in the Siegfried Tavern.

Jacob Siegfried, for whom the tavern was named, moved to the Delaware area from Pennsylvania in 1827 and bought the tavern in 1835. It was abandoned in 1985.

For several years after the Brown Township School opened in 1917, students were picked up in horse-drawn carriages complete with small stoves to keep them warm. The school housed grades 1-12.

Former student John Humes, 74, of Kilbourne, said many marriages were ignited at Brown.

He met his wife, Shirley, 72, there, and his parents also caught the love bug at the school.

Now, however, the property is an eyesore and “somewhat of a danger,” Mr. Humes said.