Building is ‘a dream come true’ for Sheets family 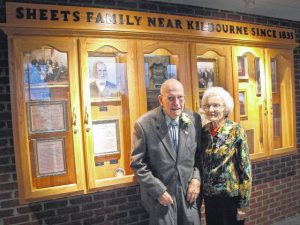 Trustees, in front a crowd of about 100 township residents, dedicated the $1.4 million Brown Township Hall on Sunday.  Charles and Betty Sheets, who donated $1.1 million for the construction of the new hall, were the honored guests.

“As I stand in this room it seems like a dream come true,” Charles Sheets told those that gathered for the occasion. “This spot where we’re sitting is where I spent 12 years of my life in school.”

However, the zoning and permitted use of the property has been consistently contested by the township’s new neighbor, Bryan Schermerhorn.

Since Schermerhorn’s initial filing, the Delaware County Prosecutor’s Office filed an appeal with the Ohio Supreme Court Oct. 13 on the behalf of the township.

“Thanks to the trustees and their patience in dealing with the opposition,” Sheets said. “It’s only been five and half months since the groundbreaking.”

Sheets talked about the display cabinet in the foyer showing the “legacy” of the Sheets family in the Kilbourne area.

“All the Sheets were farmers, but some had side jobs such as cabinet makers or blacksmith,” he said. “The building is dedicated to all Brown students and the township.”

“We have tried to be good neighbors, but it’s been quite an ordeal,” Trustee Gary Stegner said.

The board of trustees gave Stegner the authority to oversee the construction of the building.

“I’m so proud of this building,” Stegner said. “I hope in the future we can be good neighbors and good friends, at least with the Kilbourne Community Church.”

He then motioned toward the other side of the property and said, ”We’ll try our best to be good neighbors with them over here, but we’ll see.”

“I hope the future generations of our families, our kids, our grandkids, and their kids, will enjoy this building for many years to come,” Stegner said. “I hope that future trustees and future fiscal officers will take care of this building and enjoy it as much as we will.”

Trustee Steve Cole unveiled a new township logo that was designed by Andrew Clase, a sixth-grade student at Buckeye Valley. Clase designed the logo two years ago when he was in the fourth grade.

“I thought of the idea that Ohio is a country type of place and (has) a lot of farming,” Clase said. “So I came up with a farming picture.”

Clase’s design hangs on the wall to the left of the entrance to the main hall alongside an old watercolor painting of the old Brown school.

The watercolor shows a stone acorn over the top of the school’s main entrance. Trustees found the acorn and placed it in the front garden bed of the township hall.

Sheets said the new building is a real asset to the community.

“The building itself turned out more beautiful than I ever expected and not only that, in such a timely manner,” he said. “I’m just real happy with the building. I’ve always felt close to Kilbourne because of growing up here for 25 years. I just feel a part of the Kilbourne community.”

The first trustee meeting to be held in the new facility is scheduled for Tuesday, Dec. 12.