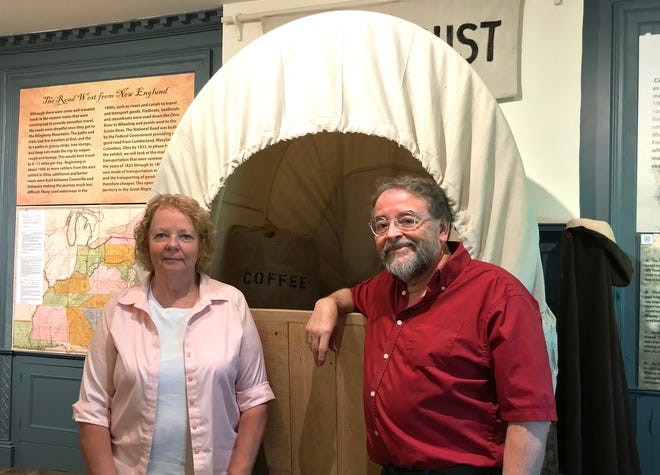 The Delaware County Historical Society not only documents local history; it also has a history of its own.

The society will turn 75 years old in November, having been formed in 1947, when some residents were concerned that expansion of the Delaware Dam project would flood a historic cemetery in Marlboro Township, executive director Donna Meyer said.

As the decades passed, the society focused on the county’s entire history and opened the Nash House Museum – built in the 1870s at 157 E. William St. in Delaware and donated by the Nash family – which housed its records and collections and continues to operate.

In 2010, the society received the donation of what is now the Meeker Homestead Museum – constructed in 1811 and 1823 – plus a large barn and 6 acres at 2690 Stratford Road, on Delaware city’s southern edge. The property was donated by Tom and Carolyn Porter, who operated Garth’s Auction Barn at the site.

In April 2021, the historical society was the winning bidder when the county auctioned the old county jail building at 20 W. Central Ave. in Delaware. The jail was built in 1879.

Each acquisition has furthered the society’s mission of preserving and educating the public about local history, Meyer said.

At the Meeker house, the society is displaying “The Journey to Delaware County” free exhibit, which can be viewed from 1 to 4 p.m. first Sunday of each month.

The exhibit describes how actions of the federal government – including organization of the Northwest Territory in 1787 and Ohio land grants to veterans – drew settlers from the East and led to Ohio becoming a state in 1803.

One of the earliest, if not the first, settlers was Nathan Carpenter, who arrived in Liberty Township in 1801, Meyer said.

Benny Shoults of Delaware is a professional artist and curator at the Meeker house and said the exhibit includes a number of artifacts from the period and was researched with help from Roxann Newton and Steve Frazier, both central Ohio teachers.

Meyer said a number of educators and librarians are active in the historical society and assist with its activities.

The “Journey to Delaware County” exhibit in particular is a community effort, Shoults said.

The exhibit chronicles a number of early settlers drawn in part by federal policy and in part by the lure of fertile farmland, Shoults said.

Some elements of the exhibit are accompanied by QR codes to allow visitors to access more information on their cellphones, he said.

The settlers included Forrest Meeker, first owner of the Meeker house, who arrived in 1811.

One element of the exhibit includes tools and supplies that could be purchased in stores of the era. Visitors are invited to select which items they would buy for a trip from New England to Ohio and could have their selections graded in terms of which purchases would allow them to survive the trip, Shoults said.

Trading with American Indians was routine for early Ohio stores, he said, since general hostilities had ceased after the Battle of Fallen Timbers in 1794 near what is Maumee, Ohio, and the signing the Treaty of Greenville with indigenous tribes in 1795. The settlers also included free Blacks, he said.

Once settlers became established, they had plenty to do, Shoults said.

Among the Meeker house artifacts is a large loom from before the Civil War, and another room displays spinning wheels and other tools used to turn wood and flax (linen) into thread for weaving.

In the decades following the first settlers, the Stratford Road area alone became a beehive of free enterprise, Shoults said.

It soon housed a sawmill and flour mill, and in later years, a local chair factory was producing 40,000 chairs a year, he said.

Shoults said Byxbe was a successful businessman in New England, where he owned a tavern, a store and an inn. When customers couldn’t pay their bills, Byxbe accepted land grants in lieu of payment, Shoults said.

Byxbe eventually sold quite a bit of his Ohio property, becoming a pioneer developer in addition to a settler, Shoults said.

Meyer said the exhibit resonates with her because one of her ancestors, Joseph Linnaberry, moved from Luzerne County in Pennsylvania to Harlem Township in 1810.

In addition to the exhibit, the Meeker house has two rooms equipped with early 1800s furniture, a room dedicated to the Stratford chair factor and a room displaying Indian artifacts found in Delaware County. 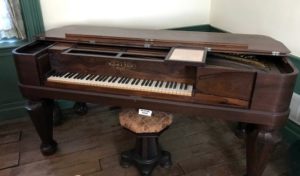 In one period room sits a piano that appears as though it’s only 10 years old, but in reality it’s at least 170 years old.

It’s a 75-key scaled-down piano, called a square grand, or pianoforte, a style that was popular in the 1800s because of its smaller size, Shoults said. Its rosewood case and ivory keys show little sign of age. He said an expert who examined it said most of its strings are original.

Its manufacturer, Hallett and Allen of Boston, only made pianos from 1847 to 1850.

Former New Albany Mayor Nancy Ferguson, who donated the piano to the historical society, said those dates were confirmed by a piano expert who had contacted her.

“When I was a resident of central Ohio, I was a member of the Delaware (County) Historical Society, as well as the New Albany Plain Township Historical Society,” said Ferguson, who has moved to Texas. “When I downsized in 2020, I made donations to both organizations, but the piano seemed the perfect fit for the Meeker house. … I was so excited the Delaware historical society accepted my donation. Not only did it go to a good home, but I can visit it in future years.”

Another exhibit focuses on archaeology for students and includes artifacts found on the Meeker property, discovered with ground-penetrating radar, Meyer said.

She said the Nash house serves as an example of a house equipped with furniture and fixtures from the Victorian era, in the late 1800s.

Maggie Webb is the curator of the Nash House Museum, Meyer said.

He said the exhibit likely would continue until the fall of 2023 and be followed by another exhibit covering the period before the Civil War.

Having a party? Maybe rent the barn

After acquiring the Meeker house property, the historical society discovered a lively market for those renting barns for parties and other events.

The Barn at Stratford is booked for events nearly every week, she said, and has its own website at barnatstratford.org/.

The historical society still is in the process of making improvements at the old county jail, which includes repairing window frames and trim before reinstalling the original window glass made before 1900, Meyer said.

The jail has been open for public view during Main Street Delaware’s First Friday events, with docents on hand and a number of visitors for each showing, she said.

The building also housed the county sheriff’s residence, and the society wants to use period furniture to re-create what the residence would have looked like, Meyer said.

For more on the society, go to delawareohiohistory.org/.