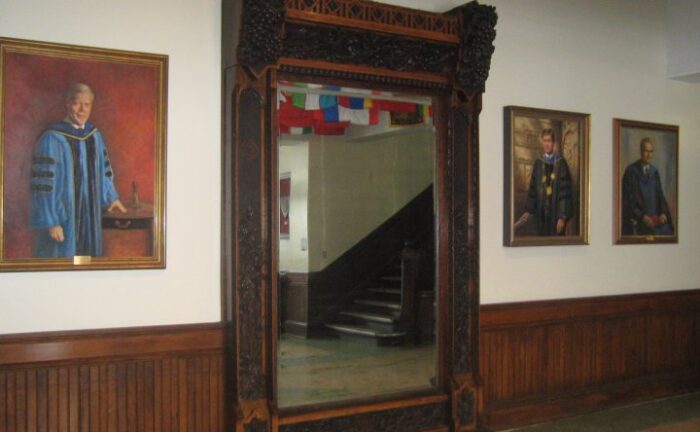 Just inside the main entrance to University Hall on the campus of Ohio Wesleyan University sits a piece of American history.

The item is a 10-foot tall frame made of black walnut, and housing a large pier mirror. The frame was a gift to the University by a former US President and his wife, a member of the OWU Class of 1853.

It is said that Rutherford B. Hayes, a native of Delaware, proposed to Lucy Webb Hayes on the steps of OWU’s Elliott Hall. What is certain is that the Hayeses maintained lifelong relationships with the University, and made more than one gift to the school during their lifetimes.

The black walnut frame, originally crafted in Cincinnati, housed a life-sized portrait of Lucy Hayes during the Hayes’ residence at The White House between 1877 and 1881. After their departure, the frame was eventually given to the University and was originally housed in Monnett Hall, home of the Ohio Wesleyan Female Institute. There, it was outfitted with a large mirror and stood at the end of the main corridor.

The ensemble then came to University Hall, likely after the demolition of Monnett by the school in the late 1970s.

The Hayes would likely have approved, as they apparently had a fondness for mirrors. The German word for mirror is “spiegel,” and the Hayes mansion in Fremont was named “Spiegel Grove.”

An oft-told tale at OWU says that if a first-year female student looks into the mirror and over her shoulder, she will see the person she will marry.