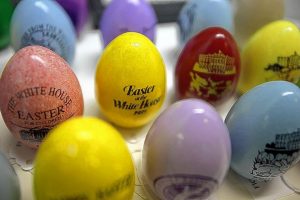 On Easter morning, thousands of children in Delaware County woke up to find a basket full of goodies left by a secretive donor.

As it turns out, the same thing happens annually for the Delaware County Historical Society, although its anonymous benefactor likely is not the Easter Bunny.

About a decade ago, someone gave the society a collection of 130 glass and wooden Easter eggs commemorating the annual White House Easter Egg Roll.

The donor sends eggs from the most recent event every year to add to the collection, which has increased by dozens of eggs over the years.

The collection now stands at more than 250. 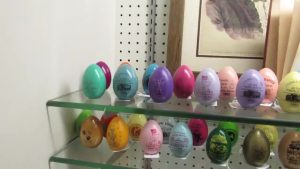 Brent Carson, president of the society’s board, said eggs in the collection date back to the administration of President Jimmy Carter. The tradition of the White House Easter Egg Roll stretches back almost a century before Carter took office.

In the years leading up to first egg roll at the White House in 1878, Washington, D.C., residents had celebrated the Monday after Easter by rolling dyed, hard-boiled eggs down the lawn of the U.S. Capitol, according to the White House Historical Association.

Congress passed a law banning the activity in 1876 to protect the Capitol’s landscaping, leading President Rutherford B. Hayes to open the White House lawn for the celebration in the second year of his presidency.

Almost every year since Hayes started the tradition, thousands of children have visited the White House for the egg roll.

Tickets are distributed through a lottery system and given out by government officials to groups, individuals and schools.

The donor recently released a statement through the historical society claiming Hayes’ lack of prominence in the city inspired the gift. No official monument to Hayes exists in the city, except for a small plaque in front of front of the BP gas station on East William Street where his house once stood.

“For too long, there has been little effort to promote Delaware as the birthplace of President Hayes,” the donor said. “Perhaps this will spur others to donate items related to Delaware’s history.” 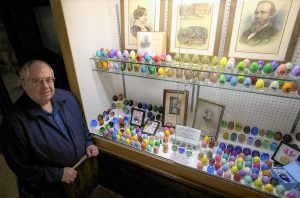 Carson said society officials do not know of a larger collection of White House eggs available for public viewing.

“We don’t believe there’s another place where they really display White House Easter eggs except perhaps the Smithsonian (Institution) on occasion,” he said.

Standout pieces in the collection include solid-color eggs signed by such celebrities as Billy Joel and Dolly Parton during Ronald Reagan’s administration.

Carson said the donor acquired the eggs from collectors and dealers of political memorabilia.

He said the society values the collection at more than $10,000, with the value of each egg determined by its scarcity.

“It’s amazing … an individual egg could be several hundred dollars,” he said.

The society’s collection of Easter eggs is on display indefinitely at the Cryder Historical Center, 157 E. William St. in Delaware.