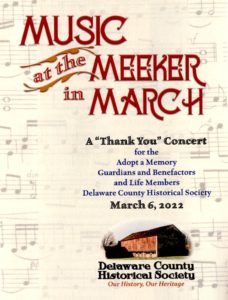 On Sunday March 6th the Delaware County Historical Society hosted a delightful private concert and reception to a capacity audience, for Adopt-a-Memory Guardians and its Life members. 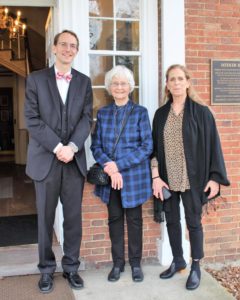 Guest Artist included: David Hejmanowski, and Mary Alice Dillman on the Square Grand piano.  Dillman was accompanied for part of her selections by violinist Susan Waterbury. 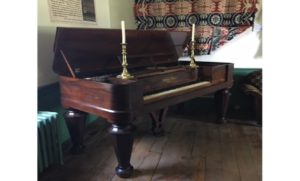 The rare Rosewood Square Grand piano was built in Boston about 1847 by Hallett & Allen. The keyboard on a Square Grand is smaller than a typical 88 key piano, consisting of 6 octaves and 75 keys and the sound is described as softer and more harpsichord like. The stings run horizontal not vertical, as on a modern piano.

The Meeker Homestead is a museum within a house.  Although other museums own Square Grand pianos, this event is believed to be the first parlor concert on a Square Grand within a museum.