Come celebrate the 225th Anniversary of the Zane’s Trace

The year 2022 is the 225th anniversary of the Zane’s Trace. The Trace is the path cut by Ebenezer Zane, Jonathan Zane, John McIntire, and others to open the Ohio Country and the Northwest Territory to migration and settlements. Muskingum County History along with the John McIntire Public Library with the generous sponsorship of Park National Bank shall present programs throughout 2022 on the Zane’s Trace and Ohio history. 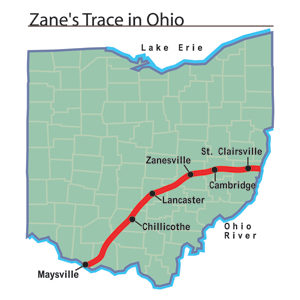 Come, learn and appreciate the history of the Zane’s Trace from its beginning in 1796-97 in Wheeling, West Virginia (at the time Virginia) to its conclusion in Maysville (at the time Limestone), Kentucky.  A county-by-county history will be presented telling of the significance of the Trace to each county through which it passed as well as its importance to Ohio. We also will discover the history of Ohio when the Delaware, Shawnee, Wyandot, Miami, Ottawa, Mingo, and other tribes occupied and roamed the Ohio Country. From the military campaigns that took place in Ohio, and, in particular, Muskingum and Coshocton Counties, between 1760 to 1815, to the final removal of the Wyandot in 1843, the history of the Northwest Territory and the Ohio Country will be explored.  The conflicts seen in TV westerns pale in comparison to the conflicts that took place in the Ohio Country and the Northwest Territory.

All programs will be held on the second and fourth Wednesdays of January through May as well as the month of September at 5:30 pm at the John McIntire Public Library with the exception of the two January programs which will be held at the Zanesville-Muskingum County Conference and Welcome Center located at 205 North Fifth Street in Zanesville across Fifth Street from the John McIntire Public Library.

January 12, 2022         John M. Barr        Author of ZANE’S TRACE: A NEW ROAD IN A NEW COUNTRY      Mr. Barr will discuss the history of the Zane’s Trace as well as its importance to Ohio. Mr. Barr will explore the history and the documents that describe the history and location of the Zane’s Trace. Many years of research went into his book. PROGRAM TO TAKE PLACE AT THE ZANESVILLE-MUSKINGUM COUNTY CONFERENCE AND WELCOME CENTER.

January 26, 2022         Alan Fitzpatrick    Author of WILDERNESS WAR ON THE OHIO; IN THEIR OWN WORDS; PLACE OF THE SKULL; THE WHITE INDIANS; CAPTIVES AND KIN ON THE OHIO COUNTRY; and, THE UNTOLD STORY OF ISAAC ZANE      Indian raids resulted in death and/or capture of white men, women, and children. Many of those captured would be adopted by an Indian family and assimilated into the tribe. Mr. Fitzpatrick will tell us about “The Untold Story of the Adopted White Indians in the Ohio Country.” PROGRAM TO TAKE PLACE AT THE ZANESVILLE-MUSKINGUM COUNTY CONFERENCE AND WELCOME CENTER.

February 9, 2022         John R. Holmes, Ph.D.        Author of THE STORY OF HISTORIC FORT STEUBEN and REMEMBERING STEUBENVILLE: FRONTIER FORT TO STEEL VALLEY      Dr. Holmes is a professor at Franciscan University in Steubenville, Ohio. Dr. Holmes will tell the history of Fort Steuben. Why was the fort built? When was it built? What was its significance to the Ohio Country? When and why was it abandoned? These are just some of the questions Dr. Holmes will answer. PROGRAM TO TAKE PLACE AT THE JOHN McINTIRE PUBLIC LIBRARY.

April 13, 2022               Michael Mangus, Ph.D.     Author of OHIO: A MILITARY HISTORY          Dr. Mangus is a professor of history at The Ohio State University on the Newark, Ohio campus. His specialty is nineteenth-century United States social, political, and military history. He also is a historian of Ohio having served as Historical Editor of Ohio History Central for the Ohio History Connection. His program is entitled “The Unusual Spirit and Resolution of the Indians.” PROGRAM TO TAKE PLACE AT THE JOHN McINTIRE PUBLIC LIBRARY.

April 27, 2022                Mary Stockwell, Ph.D.          Author of UNLIKELY GENERAL: GENERAL ”MAD” WAYNE AND THE BATTLE FOR AMERICA; THE OTHER TRAIL OF TEARS: THE REMOVAL OF THE OHIO INDIANS; INTERRUPTED ODYSSEY: ULYSSES S. GRANT AND THE AMERICAN INDIANS; WOODROW WILSON: THE LAST ROMANTIC; and, history books for students, THE OHIO ADVENTURE: A JOURNEY THROUGH MAINE; MASSACHUSETTS: OUR HOME; and, THE AMERICAN STORY: PERSPECTIVES AND ENCOUNTERS TO 1865               Dr. Stockwell earned her PhD. from the University of Toledo. She served taught history at Lourdes University and served as Chair of the history department at Lourdes. Since retirement, Dr. Stockwell has devoted herself to a full-time writing career. Dr. Stockwell will present two programs, one on her book THE OTHER TRAIL OF TEARS, at noon and her second program will be on her book, UNLIKELY GENERAL, AT 5:30PM. PROGRAMS TO TAKE PLACE AT THE JOHN McINTIRE PUBLIC LIBRARY.

May 11, 2022                 Lisa Uhrig       Ms. Uhrig is 30- year employee of the Ross County Historical Society where she serves as Photo Archivist and Membership Secretary. In 2017, Ms. Uhrig completed a 7- year project that culminated in her book, A LOOK AT THE TOWNSHIPS OF ROSS COUNTY, OHIO. Her book documents the sixteen townships of Ross County using the photo collection from the historical society as well as from family and friends. Ms. Uhrig believes she has discovered the original route of the Zane’s Trace through Huntington Township and her program “Zane’s Trace through Ross County and its Migration” will take us on that journey and beyond. PROGRAM TO TAKE PLACE AT THE JOHN McINTIRE PUBLIC LIBRARY.

May 25, 2022                John Mylett        Mr. Mylett is an Avocation Archeologist. He is a volunteer for the Pickaway County Historical Society at the Clark-May Museum in Circleville, Ohio. Mr. Mylett’s program is entitled “Zane Trace Trail in Prehistory.” PROGRAM TO TAKE PLACE AT THE JOHN McINTIRE PUBLIC LIBRARY.

September 14,2022              C.J. Hunter,IV            Mr. Hunter is the Executive Director of the Kentucky Gateway Museum Center located in Maysville, Kentucky. The Museum is the oldest chartered Museum in the Commonwealth of Kentucky dating back to March 1, 1878. The Museum has five primary areas of focus: History; Research Library; Education through its outreach programs; Bourbon History (The Old Pogue Experience); and, KSB Miniatures Collection. The Museum consists of three buildings, two of which were built before 1900. The Zane’s Trace ended in Limestone, Kentucky. It is approximately 230 miles from Wheeling. Come listen, learn and appreciate the “Presentation by the Kentucky Gateway Museum Staff.” PROGRAM TO TAKE PLACE AT THE JOHN McINTIRE PUBLIC LIBRARY.

September 28, 2022               Roger Pickenpaugh            Author of AMERICA’S FIRST INTERSTATE: THE NATIONAL ROAD, 1806-1853 and JOHNSON’S ISLAND: A PRISON FOR CONFEDERATE OFFICERS      Mr. Pickenpaugh taught school at the Shenandoah Middle School. He also serves on the Advisory Board for ECHOES MAGAZINE, a publication of Ohio History Connection. PROGRAM TO TAKE PLACE AT THE JOHN McINTIRE PUBLIC LIBRARY.