One of Ohio’s oldest and most beautiful barns is passed by each day by more than 50,000 cars and trucks as they motor north and south along State Route 23, just south of Delaware. 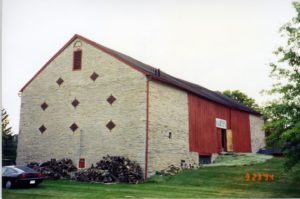 A large sign that hangs on the barn’s bankside reads simply: GARTH’S. If they happen to glance to the East, they can’t help but appreciate its beauty, but as the name fails to ring a bell for the vast majority of those 50,000, they will continue on their way.

Unless you love antiques, for Garth’s is one of the most respected auction houses in America.

Thousands of the world’s treasures have been passed from one owner to the next for decades – and all to the sound of the gavel amongst the stone and timbers and history of this barn.

I had the opportunity to meet with the property’s current owner, Tom Porter, and tour of the barn as well as learn about the history of this area.

This area was part of the U.S. Military Lands and was given to a man, whose name we do not know, for his service in the Revolutionary War.

This fellow sold it to his relative, a man named Meeker, around 1800. Tom has a land deed, which he thinks might be for the property but he says that further investigation was needed to determine that.

The first owner must have been a high-ranking officer in the war because he was given 4,000 acres by the government.

Meeker brought with him his wife, who came from Bucks County, Pa. The brick house they built, which still sits on the property just about 100 feet south of the barn, was started in 1808 and completed in 1812.

Why it took so long to build is a good question. Right after it was finished, Meeker left to fight in the War of 1812 where he was a supply colonel.

With 4,000 acres, a beautiful new two-story brick house and a huge new barn he undoubtedly felt much was at stake. We don’t know exactly when the barn was built, but Tom says it is listed in the tax records of Delaware County in 1820.

Tom said he hoped they would find a date when, about 15 years ago, he had the barn’s stone and decorative brick vents repointed, but nothing was discovered.

Rarely do we find an accurate date of construction on a barn. Lots of owners carved their names into granary boards over subsequent generations, but finding the construction date is much harder.

Whenever we build something of quality that we hope will last, we should sign and date it.

Finding a name and or date on a barn or a piece of antique furniture gives it a greater value and meaning.

I wondered what group of people accompanied Mrs. Meeker from Bucks County, as the barn is a Pennsylvania forebay. It has a full basement, an earthen bank on one side and a 4-foot-6-inch overhang on the other.

The barn’s limestone measures 46 feet, 6 inches by 105 feet 6 inches with its long axis running north-south. Opening the doors on the bank’s western side and the doors on its eastern side above the forebay allowed for the prevailing wind to blow the wheat chaff away during threshing and winnowing.

The overhang of the forebay gives some protection to the doors beneath, all of which have their original 3-foot strap hinges.

Tom told me that at one time in the early 1800s there were many grain mills along the Olentangy River, which runs about 100 yards from this barn. And there were nine stone-enders similar to the Garth barn. Three still survive along the road.

Garth Oberlander purchased 210 acres, which included the house and barn, from the Union Fork & Hoe Co. in 1940 for $10,000. Union Fork & Hoe owned the land for the purpose of harvesting its timber for their business.

Porter has been a great steward of the Garth barn. It has been mentioned in this article previously that we like to think of barn owners as having the task of stewardship for their barns.

If barns are properly maintained and kept in good repair, they can last for hundreds of years, just as the barns in Europe have. Not just for the sake of the history they hold, but for their beauty as well.

Tom recalled a time about 25 years ago when a very well dressed man came into the lower level of the barn, where the auctions are held, and looking around exclaimed, “I’m going to buy these beams. I build boats and this is what we need. I’ll have my men come in here and replace these with steel beams and we’ll cover them over so you’ll never know. All we have left to discuss is the price.”

That was the end of that conversation.

The original column in Farm & Dairy
[Editor Note: This article does not reflect historical evidence that has been more recently uncovered by the author and other researchers.]