By D. Anthony Botkin – abotkin@civitasmedia.com in the  Delaware Gazette 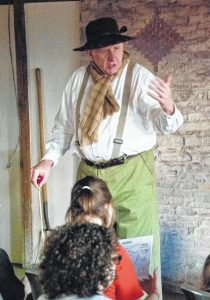 In the 19th century runaway slaves traveling north to Canada in search of freedom passed through Delaware County with the help of a community of abolitionists acting as conductors for the Underground Railroad.

To commemorate Ohio’s history with the Underground Railroad the River-to-Lake-Freedom Trail was designated along US 23 and State Route 4. The project was a collaborative between the Friends of Freedom Society Inc. and Ohio Department of Transportation.

“When you look at Route 23 which runs through the City of Delaware,” said Jack Marchbanks, Deputy Director ODOT district six. “It pretty much mimics a trail that a lot of escaped captives took.

Marchbanks was one of the researchers in the River-to-Lake-Freedom Trail.

Delaware County is located in the middle of the trail that runs from Portsmouth at the Ohio River north to Sandusky.

“Runaways would follow the Olentangy up from the Ohio River north to Canada. They would walk in the shallows next to the bank,” Marchbanks said. “As you know, bloodhounds can’t smell through water.” 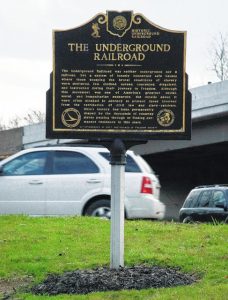 Every day the busy traffic passes by the River-to-Lake-Freedom Trail marker that stands along the bike path on William Street commemorating Delaware’s role in the Underground Railroad.

“All these river systems lead up to Sandusky where a lot of the escaped captives went across the lake to Windsor,” Marchbanks said.

He said he considers the Underground Railroad the nation’s first civil rights movement.

“Ohio definitely was in the vanguard,” Marchbanks said. “It was one of the leading states in terms of facilitating the escape of runaway captives to Canada.”

When Marchbanks talks about the history of the railroad he doesn’t use the term slave.

“I don’t like calling them slaves,” Marchbanks said. “I call them captives.”

Marchbanks said the runaways who passed through the county found large groups of people that were anti-slavery.

“Delaware was home to Quakers and Methodist alike,” Marchbanks said. “Delaware County was a stronghold for abolitionist.”

Quakers insisted that all people had the light of God in them which made them children of God, Marchbanks said.

“The Quakers weren’t having none of it. This slave thing is wrong,” he said. “It couldn’t have been done without white conductors.”

Patience Meeker, portrayed by Laurie Schaefer, talks to Willis 5th graders Friday about the role the Meeker House played in the history of the Underground Railroad. Schaefer said the kids think she really lives in the Meeker House.

Leslie Blankenship, Friends of Freedom Society Inc., said many of the the conductors had prices on their heads for helping the runaways escape recapture.

Blankenship talked about William Cratty as one of the most trusted conductors in Delaware County.

From a clipping in The Chicago Evening Post, July 18, 1893 states that Cratty “aided 3,000 slaves” and was considered “one of the principal stations of the Underground Railroad.”

Peggy Cratty once had a family of runaways staying with her when some slave catchers had tracked the runaway family to her home. She wouldn’t let the catchers in the house without a search warrant and it happen to be Sunday.

“The magistrate told them it was the sabbath and he wasn’t working on a Sunday,” Blankenship said. “It was all part of the deal.”

By the time the catchers had a warrant on Monday the Crattys had smuggled the runaways out of the house.

“They didn’t know who these people were that just showed up at their farm,” Blankenship said. “They didn’t believe in slavery and they didn’t want the federal government telling them what to do.”

Blankenship said it was a tumultuous and emotional time causing church congregations to split.

“Sometimes they were narrow-minded but they stood up for what they believed in,” Blankenship said.

According to Blankenship, there were many Underground Railroad stations in Delaware County. She said there was once a community of 35 freed slaves from North Carolina known as “Little Africa” on Africa Road and North State Street. Many of the homes are now under the water of Alum Creek State Park, she said.

She said in the southern part of the county on Jewett Road and State Route 315 is a house that was settled by a man named Major Bartholomew. The house was known as the toll house. It had a tunnel in the back and a hiding place for runaways.

The Meeker Home owned by the Delaware County Historical Society, between US Route 23 and Stratford Road, was once a station for the railroad.

“All the little areas have their own little piece of history,” Blankenship said.