Several volunteers of the Delaware County Historical Society have noted that they played the Song Flute in school.  In fact, many adults throughout the United States learned to read music and play the Fitchhorn Song Flute. They were widely used in public schools to teach the basics of reading and playing music.

Fitchhorn’s patent No. D115616 is a design patent, that is, a patent relating to the appearance and structure of the instrument, not a new invention. It was Patented on July 11, 1939. The patent is titled “Design for a Musical Instrument of a Flute-Like Nature.”

Elva Joseph Fitchhorn (shown below) was the band instructor for Delaware, Ohio City Schools, who originated and patented the design. 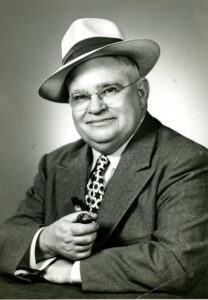 Elver J. Fitchhorn was born in Pulaski County, Indiana on July 3, 1896. He was a former French horn player with the John Phillip Sousa band. Early in his career, he played violin in theaters. He took classes at VanderCook School of Music, entering in September 1915, up to 1936. He studied personally with Hale VanderCook. Fitchhorn was regarded as the “father of the pre-band instruments” (the saxette and song flute). He also patented a molded plastic fipple-flute in 1937. He was bandmaster in the Delaware, Ohio City Schools from 1928 to 1938. Later he served as educational director for C.G. Conn Ltd. In 1936 the School Musician rated him one of the 10 outstanding band masters in the United States. He received the National Band Association citation of excellence in 1976. He died in 1985 in Albuquerque, New Mexico.

(For additional information, including a copy of the Patent see: http://mewzik.com/research/fitchhorn/index.php  Viewed May 10, 2021)

Please remember the Song Flute, like all of our items at the Adopt A Memory website, allows people or groups to donate money to help curate and restore or maintain artifacts in our collection. In turn, adopters receive signage on the item, if displayed, a certificate and details about “their” item. The items do not leave the museum.